Almost all C. difficile infections are connected to getting medical care.

People getting medical care can catch serious infections called health care-associated infections (HAIs). While most types of HAIs are declining, one – caused by the germ C. difficile* – remains at historically high levels. C. difficile causes diarrhea linked to 14,000 American deaths each year. Those most at risk are people, especially older adults, who take antibiotics and also get medical care. When a person takes antibiotics, good germs that protect against infection are destroyed for several months. During this time, patients can get sick from C. difficile picked up from contaminated surfaces or spread from a health care provider’s hands. About 25% of C. difficile infections first show symptoms in hospital patients; 75% first show in nursing home patients or in people recently cared for in doctors’ offices and clinics. C. difficile infections cost at least $1 billion in extra health care costs annually.

C. difficile infections are at an all-time high.

C. difficile germs move with patients from one health care facility to another, infecting other patients.

C. difficile infections can be prevented.

For Clinicians: 6 Steps to Prevention

1. Prescribe and use antibiotics carefully. About 50% of all antibiotics given are not needed, unnecessarily raising the risk of C. difficile infections.

2. Test for C. difficile when patients have diarrhea while on antibiotics or within several months of taking them.

4. Wear gloves and gowns when treating patients with C. difficile, even during short visits. Hand sanitizer does not kill C. difficile, and hand washing may not be sufficient.

5. Clean room surfaces with bleach or another EPA-approved, spore-killing disinfectant after a patient with C. difficile has been treated there.

6. When a patient transfers, notify the new facility if the patient has a C. difficile infection. 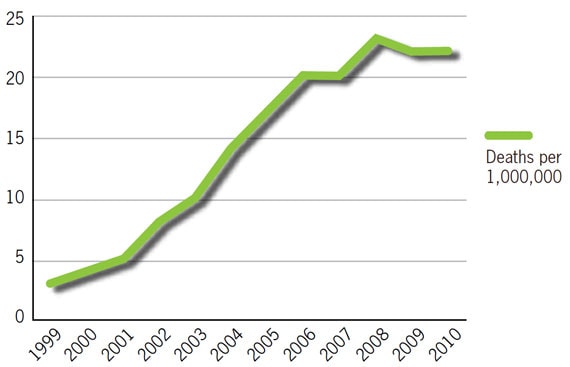 * Age-adjusted Rate of C. difficile as the Primary (Underlying) Cause of Death. 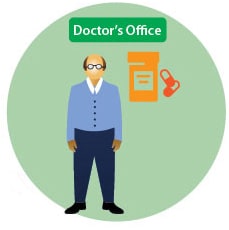 George, a 68-year-old man, goes to the doctor’s office and is diagnosed with pneumonia. He is prescribed antibiotics, drugs that put him at risk for C.difficile infection for several months. 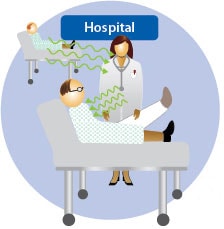 One Month Later
George breaks his leg and goes to a hospital. A health care worker spreads C.difficile to him after forgetting to wear gloves when treating a C.difficile infected patient in the next room. 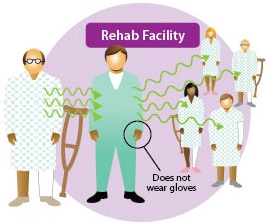 Two Days Later
George transfers to a rehabilitation facility for his leg and gets diarrhea. He is not tested for C.difficile. The health care worker doesn’t wear gloves and infects other patients. 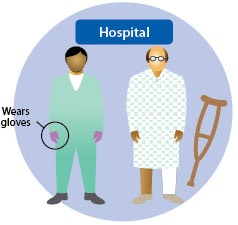 Three Days Later
George goes back to the hospital for treatment of diarrhea and tests positive for C.difficile. He is started on specific antibiotics to treat it. Health care workers wear gloves and do not spread C. difficile. George recovers.

States and Communities Can

Doctors and Nurses Can